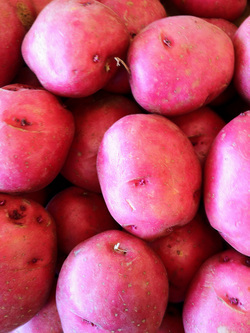 The growing season in 2012 was cool and very wet in June.  July and August was hot and dry with lots of sun and our fall was longer than usual as a typical frost date early in September did not occur until late September.

Pat C. was our top producer for 2012 with her chosen variety of Red Pontiac, the top producing variety for 2011 as well.  Pat planted 6 oz and harvested 5 lbs making for a respectable 16:1 ratio!  She planted her potatoes end of May and harvested them Sept 15.  Pat used a tall, round bucket with holes in the bottom which she filled with purchased potting soil.  No additional soil  amendments were used!  The fertilizer used  was Miracle Grow All Purpose Fertilizer 24-8-16 and she hand watered as required.

Additional info from participants included:  applying garden sulfur on seed potatoes before planting to help prevent scab, applying Epsom salts when watering to provide magnesium and sulfur as micronutrients, applying compost tea  to water plants plus 0-10-10 to promote root growth while keeping top growth under control by not supplying additional nutrition.  Potatoes will grow tubers up the buried stem so bear that in mind as we embark on our  2013 Potato Tower Trial.  With different varieties and improved growing methods and, hopefully, great potato growing weather, we hope to generate hefty yields from our towers.  Questions?